When you have teens on a family trip to Seoul, you must find activities
that will pique their interest. So when we proposed a trip to see North Korea,
the boys were happy to join this unique trip.

A visit to DMZ is best done with a tour group. So we booked our DMZ tour from
Klook. While Cafe hopping may be the in thing to do in Seoul, it is good to
take a day tour out of the city to explore the history of the Korean War in
this educational tour.

The popular K-Drama Crash Landing on You’ has also increased awareness of DMZ and has probably piqued interest in these tours.

There are 3 parts to this tour. The first would be a visit to Imjinak Park,
followed back a walk down the Third Infiltration Tunnel. The last part would
be a visit to the observatory towers for a bird’s eye view of North
Korea.

Our initial tour was for the 8am departure. We were aware that there is a
possibility of an earlier meeting to secure a spot for the tour. At our time
of booking, DMZ has a limit to the number of visitors per day. Tour groups can
only purchase tickets on the spot on a first-come, first-serve basis.

When our tour leader liaised with us the day before and gave us the option for
an earlier departure. Being well aware of the situation, we opted for the
earliest bus to leave at 6am. Transportation was not readily available then,
so the tour sent mini buses to pick us up from our hotels directly.

Once everyone is gathered on the bus, we are good to go. Our tour guide, Julie
Park, is a local. A veteran in DMZ tour with well spoken English language, she
looked like she had just stepped out from a K-Drama set. Her presentation and
knowledge of this tour were among the better ones we had experienced. 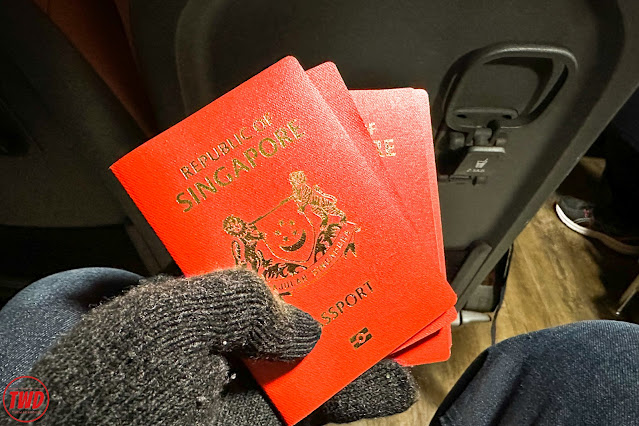 Do note that you need a passport to tour the Third Infiltration Tunnel and Observatory tour.

The first stop was Imjinak Park. Imjinak Park is located on the banks of the Imjin
River and holds statues and monuments regarding Korean War. It was built in
1972. This park is a symbol of the division between North and South Korea, and
it is the northernmost place where South Korean residents and tourists can
visit freely without the need for permission. 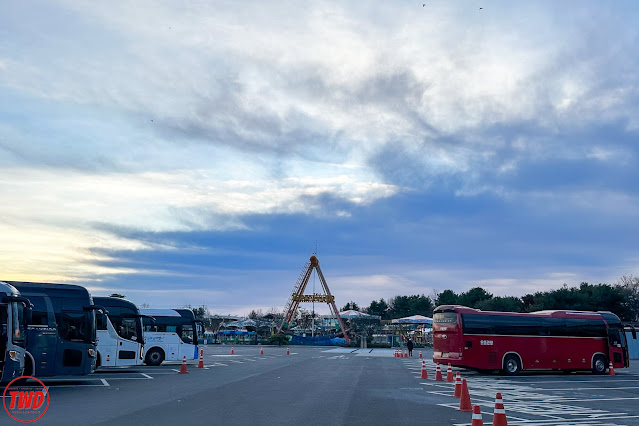 There are also restaurants and a small amusement park on-site.

We had some time before the ticket booth opened and had a quick bite at the
cafe.

After that, we pop into the main building to check out a miniature turtle ship replica. This ship is well known to have successfully fended off the
Japanese navy invasion of Korea. After getting our tickets for DMZ, the guide
bought us around Imjinak Park for a tour.

This Peace Bell was built in 2002 to pray for peace for national unification
and the human race.

This memorial enables displaced people whose hometowns are located in North
Korea to pay their symbolic respect to their families in North Korea during
cultural events.

This is the last train to cross North and South Korea. It is a military
transport delivering supplies to UN forces and was initially stuck at
Hwanghedo, now known as North Korea. It has an interesting history. Unable to forge again due to the conflict, it was stopped by US troops who
destroyed it to prevent it from falling into North Korea’s hands. It has since moved here in 2004 and is registered as a Cultural Heritage site.

The fence behind it has prayers for unification. 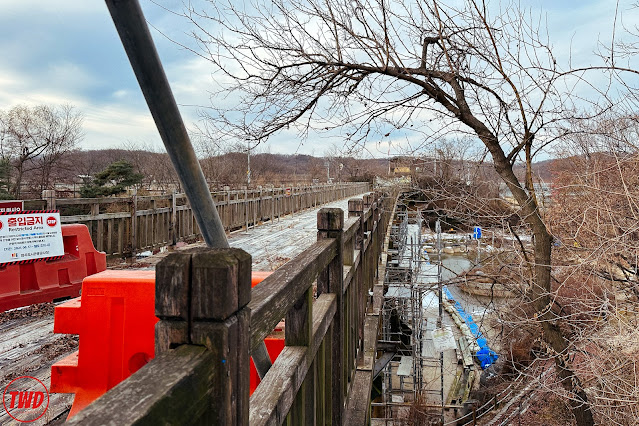 The Freedom Bridge is the bridge that bought home over 12,000 Korean War
prisoners from North Korea. It is boarded up for protection, but we still
catch a glimpse of it from the side.

These statues represent Korea Comfort Women during the Japanese occupation of
Korea. It is a

There is also a spot where you can get North Korea Notes as souvenirs. The
price is a tad exorbitant, with 5 North Korean won going for 7000 S Korean
Won. In hindsight, getting one off the black market may be better. 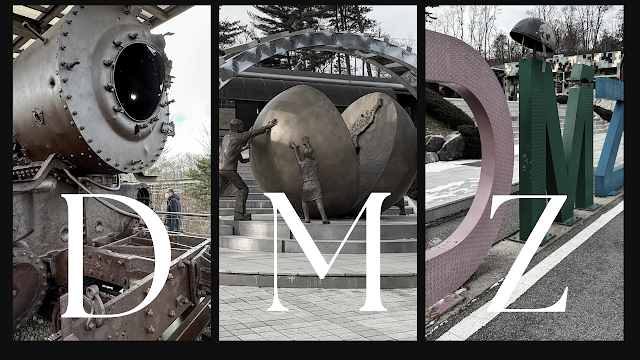 After about an hour, we are off to DMZ. DMZ is the Korean Demilitarized Zone. It is a strip of land across the Korean Peninsula near the 38th parallel
north. It is a border that divides North and South Korea and serves as a
buffer zone. Running 250km long and 4 km wide, this strip of land is primarily
undeveloped. Being early for this tour has its benefits, as we were one of the first groups
to visit the DMZ that day.

Our first stop was a DMZ exhibition hall short

Here we watched a short video on unification and checked out the exhibits.

We have an interesting view of the DMZ from the miniature models.

The next stop is the Third Infiltration tunnel. This tunnel was discovered in
October 1978 following a tip-off. The tunnel is estimated to be 1.6km long and
73m underground. It is estimated that thousands of troops can use this tunnel
to infiltrate the South. There were 4 tunnels discovered, but only one is open
to the public due to the location.

The use of cameras is forbidden here, but you can check out how it looks like
with a photo from Klook

This is a 1.6km tunnel where visitors can explore part of it. While the
exploration tunnel is short, the walk down and especially up and be quite
tiring. Taller folks would have to take note of the short roof; wearing
protective helmets is necessary if you want to keep your head intact.

While photos are not allowed in the tunnel, you can take pictures around the
compound.

You can also pick up souvenirs there. We suggest picking up a piece of the
fence that used to divide the North and South.

The next stop is Dora Observatory.

This is where you will get a bird’s eye view of North Korea.

Interestingly, you can see the 2 flagpoles of North and South Korea. It is
said that North Korea purposefully built a taller flagpole to show strength.

There is also a North Korea Peace Village next to the flagpole. It is said
that this is a dummy village with no occupants. The main reason for its
existence is that North Korea wanted to show its modernism by having a village
that is supposed to have modern amenities.

At the end of the tour, we were bought to a convenience store that sells DMZ
souvenirs.

Remember to stay within your tour group as there may be live mines around. 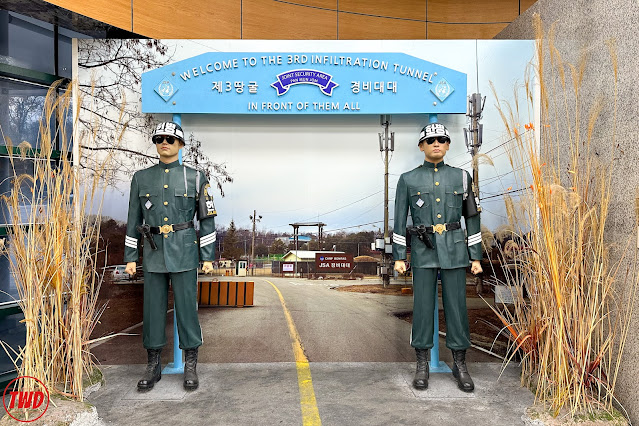 Our tour ended around 1pm, and we were back in Seoul by 2pm, giving us ample time for other activities. Overall, it was a very insightful tour and the opportunity to see a part of North Korea was very enticing. So this trip gets an A in our books!

How to book a Tour?

Booking can be made via Klook. Once done, a confirmation notice will be sent
to you. The Tour Guide will contact you a day before for pick-up details. The
DMZ tour starts from around $41 per pax, making it an affordable day trip. Tipping is optional in Seoul.

Check out our 10 days itinerary here. 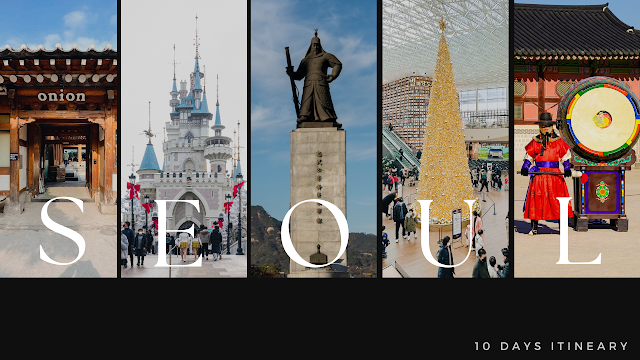 Disclosure
The post contained affiliated links. It would not
cost you more to book from the links, but it will keep the lights on. Thanks for supporting!

Which laser hair removal machine to buy in Australia 2023?