If you are in Chinatown, keep a lookout for its unique Street Art.

These colourful murals captured the old images of Chinatown. It can be found
mainly along the alleyways and streets of Chinatown Singapore.

Here are the locations of Chinatown Murals in Singapore and where to find
them.

We will start the journey at Banda Street. This is where the iconic Buddha
Tooth Relic Temple is located. In addition, murals can be found at Chinatown
Complex and the stairs leading to Kreta Ayer Community Center. In 2015, there
was a project called Colouing Banda Street 2015, where murals were
commissioned to brighten up these streets.

Welcome to our World
Artist: Belinda Low
Location: Ground Floor Staircase in between Blk 4
and 5

Samsui women are female immigrants known for their red headscarves. They
worked mainly in construction and industrial jobs in the 1920-the 40s. They
played prominent roles in building Singapore at the infancy stage.

Can you spot the Aranda Lee Kuan Yew and Vanda Kwa Geok Choo Orchids in the
photos?

The Cool Dude is supposedly the male version of Samsui Women. The main jobs
for them in the past are coolies (labourers) and fishermen. This mural is
found at the same staircase on the 2nd Floor.

Bridge over calm water has a painting of nine Koi swimming in a lake to
symbolise unity, prosperity and longevity. An old couple stands at the side to
admire the swimming koi.

It is one of two murals found in the same nook.

The Back Lane
Location: 1st Floor Staircase between Blk 4 and 5. Bicycle Parking
Space 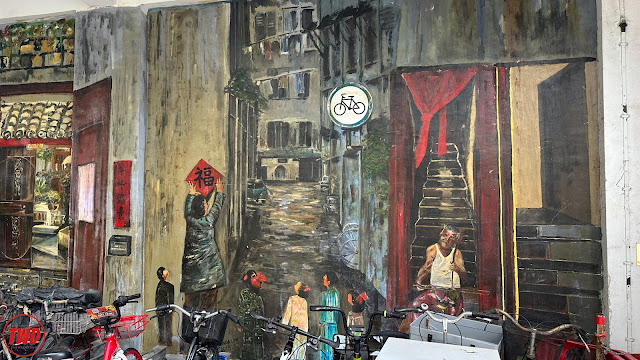 The Back Lane depicts a scene of the back lanes of old Chinatown. It looks
like a family is preparing to celebrate the Lunar New Year. Interestingly, the
bicycle parked in front gives it a 3D pop. 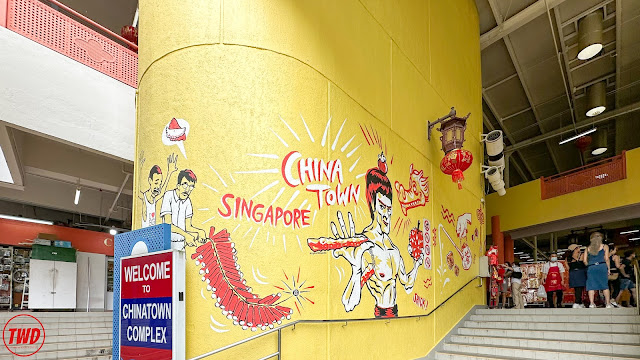 A montage of murals at Chinatown Complex. These murals are painted on the
yellow pillars and walls around the complex. 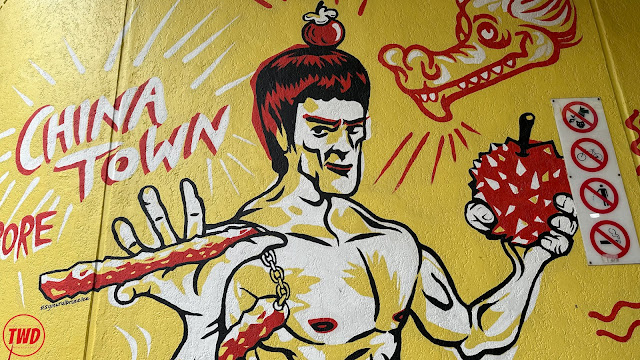 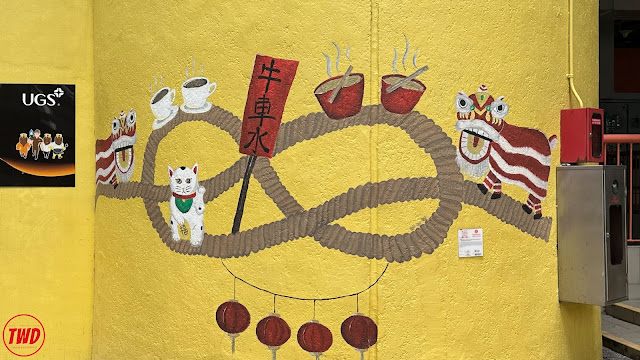 Moving to the next street, there are more murals to be discovered 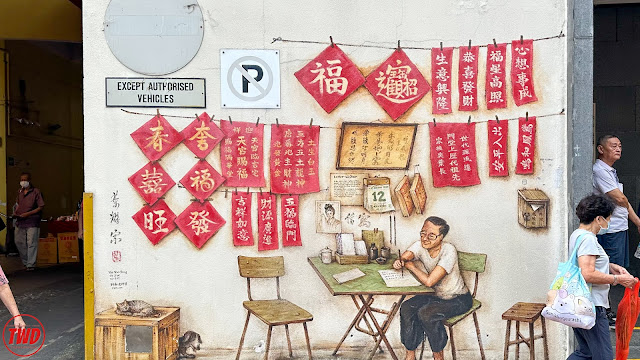 You will see the first of many murals by the talented Yip Yew Chong (YC)
depicting life in nostalgic Chinatown. His murals spread all around Singapore,
and he is one of the more accomplished mural painters in town. 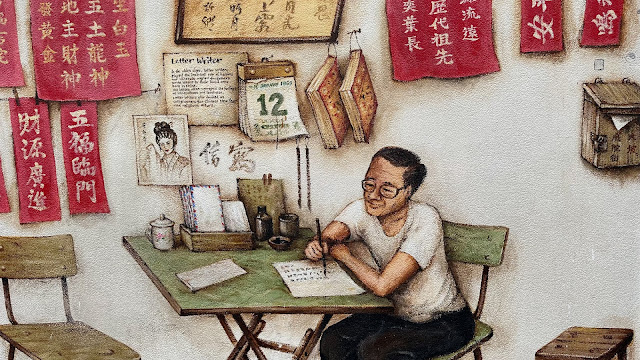 Letter Writer shows a man plying his trade, writing letters for the
illiterate, and writing CNY greetings that many still use to decorate their
houses during this period. Pose with the Letter Writer by taking a seat
opposite him.

The second mural by Yip Yew Chong on Smith Street depicts the artist’s home in
Sago lane featuring his mother in the mural.

Detective Conan came to Chinatown to try our ‘smelly durians. Detective Conan
is a character in  a Japanese detective manga series. We don’t know the
connection with Chinatown, but it is another mural by Yip Yew Chong. 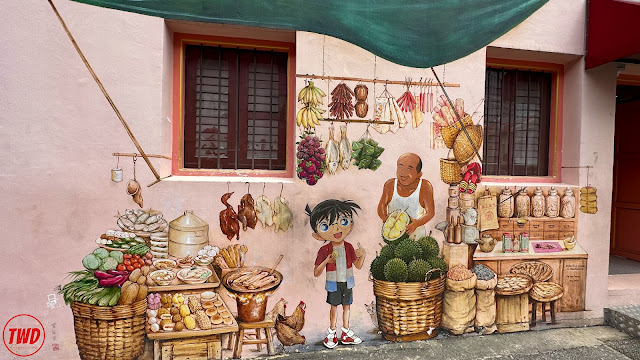 An old-school Mid-Autumn Festival celebration scene. Before battery-operated
light lanterns, cellophane lanterns were the norm. The old-school lanterns
were often bright and colourful.

This is one of the most extensive murals in Chinatown, spanning 3 storeys high
and taking a whole side of a building. This is the second mural by Yip Yew
Chong on Smith Street.

Filled with intriguing details, it depicts life in Chinatown of
yesteryears.  You can pose with this by finding a plastic stool nearby
and inserting yourself in the mural.

You would see fruit sellers, barbers plying their trades, a coffee shop scene
and even a duck hawker.

Look up and see a person pouring tea with a huge teapot.

This is by far the most impressive mural in Chinatown. 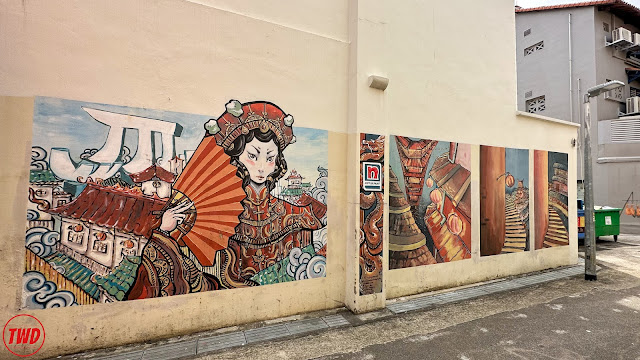 This mural is sponsored by Nippon Paint

Cantonese Opera was once a popular entertainment in pre-TV days. From fancy
costumes to painted faces, these wayang plays are probably the first
‘musicals’ to hit Singapore. While they may disappear from today’s
entertainment scene, their popularity is beautifully captured by Yip Yew
Chong.

There is a set of three different murals painted on the same street. On the
top left is ‘The Window’, a scene depicting the Kadir family and the Lee
family, owners of the Mamakshop and the lion dance head maker below them.
These are all inspired by real people who once ply their trade in
Chinatown.

The Adul Kadik ‘Mamak Store’ is inspired by an actual store in Sago Lane. The
Lion Dance Maker Shop is also based on a shop at No 2 Ann Siang Hill in the
1980s.

The last set shows a colourful cart selling traditional paper masks and
puppets that were once popular in Chinatown. The man in the photo is Mr Yeo
Ban Kok, who hand-crafted the paper faces and paddled them all over Singapore. 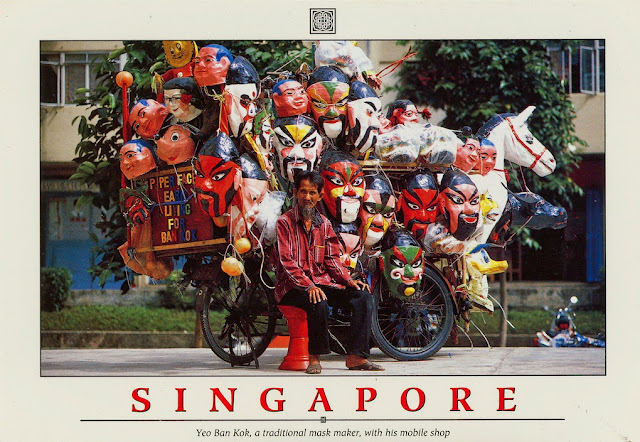 This is how he looked in person.

At the side of Wilmar holdings is a modern Street art mural. It looks out of
place with the traditional street art around Chinatown, but the presence tells
of a society moving ahead with time. 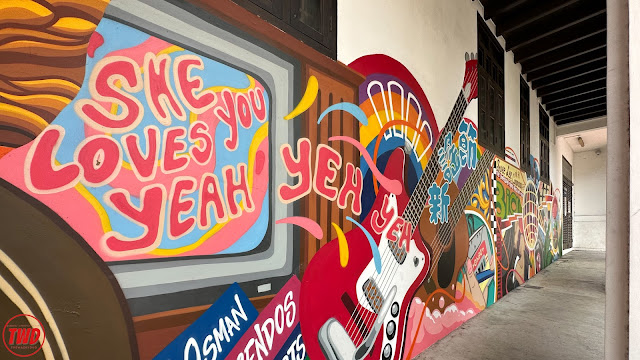 
Location: Side of Porcelain Hotel 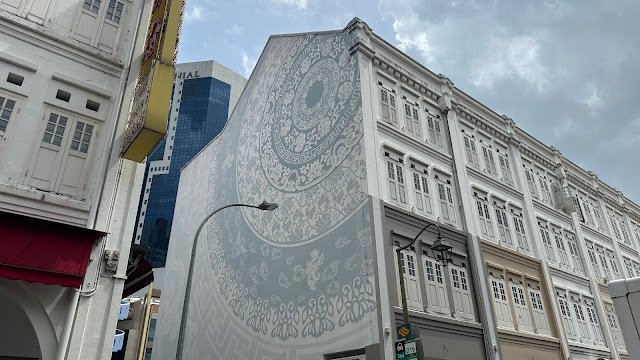 The last mural is painted on the side of the Porcelain Hotel at 48
Mosque Street. It is a blue and white mural that resembles designs
normally found on porcelain. It is another modern interpretation of
Street Art in Chinatown.