They will re-centre the mid-point of the Singapore dollar nominal effective
rate. In layman’s terms, MAS will allow Singapore Dollar to appreciate. The
main goal would be to make imports cheaper and hopefully stop the rising
prices of goods and services.

To most of us, this may not mean much. However, one positive impact would be
that you would enjoy a ‘cheaper’ holiday this coming November/December. As a
result of the tightening, 10 currencies are close to an all-time low against
SGD for 2022.

Who is going down under?

Earlier this year, AUD was stronger than SGD at 0.98. It has since dropped to
a low of 1.13. This means it is now 15% cheaper to get a house in Australia. If you had bought a house earlier this
year… oops!

The low for the year was 1 SGD to 0.63 GBP. Today, we are 1 SGD to 0.65 GBP.
This is still stronger than the 0.55 recorded earlier for the year. It would
be 15% cheaper to head to Manchester to watch the
wonderboy  Haaland in action at the English Premier League.

You would have thought that CAD would follow USD and show strength against
SGD. On the contrary, it has weakened from 0.91 to 0.97, making it 7% cheaper
to travel to take a hike at Rocky Mountain or marvel at Niagara falls.

While travel restrictions is still in place, the fall of CNY from 4.63 to a
low of 5.04 means it is worth a second look.

At 9% cheaper, China would be a good place to visit.
Alternatively, you can always head to AliExpress for some cheaper goods.

We are close to the low for EUR at 1 SGD to 0.72 EUR. Great for those planning
a treat to experience winter in Europe. At 13% cheaper, it is worth it to head
there for the Gucci, LV and Hermes.

With the opening up of Japan effectively from Oct 11, it would mean that more
people will be planning a trip there. Japan is the country that the majority
would love to visit for holidays.

Planning a trip off the beaten track?

When we often talk about Australian Dollars, we always check on NZD as they
tend to move in tandem. From 1 low of 1.03 a year ago, NZD is now 1.26 against
SGD. This is a whopping 22% cheaper for those looking to get to Middle Earth and have a Lord of the Rings
experience.

If you are heading to the Philippines, good news!

If you ever wish to head on a safari, this is the best time to do so!

Taiwan is another country that is opening up its doors to travellers.

The land of smiles has always been a popular holiday destination. 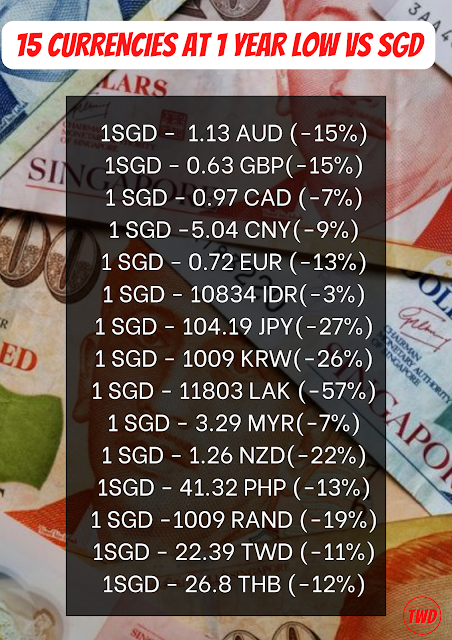 Tags: 15 Currencies at 1 Year Low against SGD - Where to go for your next holiday
Previous Post

What IS The Perimenopause | Early Symptoms of Menopause

What IS The Perimenopause | Early Symptoms of Menopause