MRT is a godsend even in tiny Singapore.

The first MRT line is the North-South line, with only 5 stations connecting
Yio Chu Kang to Toa Payoh. Today, we have 6 MRT lines with over 170 stations
and 3 LRT Lines with over 40 stations. In the future, there will be an
additional 2 more lines and other stations to existing lines. The main MRT
lines are often identified by their colours instead of their generic names for
easy reference.

This is an impressive feat for a country that is only 728.6km. In the past,
staying near an MRT would probably send the property price soaring; today, the
impact is lessened, especially when most are staying within 1km of an existing
or future MRT line.

With the proliferation of MRT stations, sometimes one might get a little lost.
So here is a quick guide to the Current and Future MRT stations.

As of September 2022, there are 6 MRT lines and 3 LRT times operational. They
are as follows. 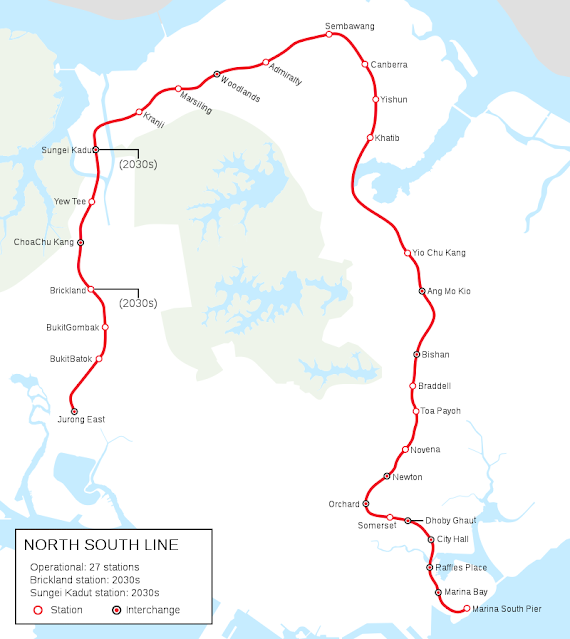 First MRT line in Singapore. There are currently 27 stations covering 45 km,
with 2 additional stations to be built by mid-2030. Brickland and Sungei Kadut
Station Sungei Kadut interchange station will be between Kranji and Yew Tee
and will link up with DTL. It is also the last stop for the downtown line.

As the name implies, this line travels the North-South route of Singapore. It
has since expanded from Jurong East to Marina South Pier. 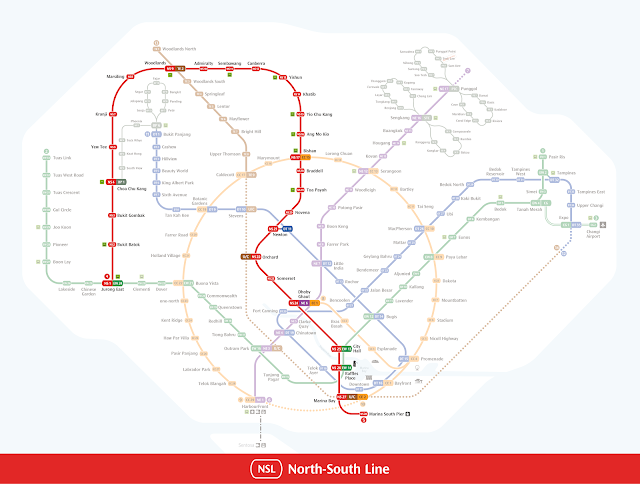 There are a total of eight interchanges that connect the NSL to the other
lines.

The EWL is the 2nd MRT line in Singapore and is currently Singapore’s longest
MRT line at 57.2km. There are a total of 35 stations, of which 8 are
underground. As the name implies, it connects the West to the East of
Singapore from Tuas Link to Changi Airport and Pasir  Ris.

There are a total of  9 interchanges that connects EWL 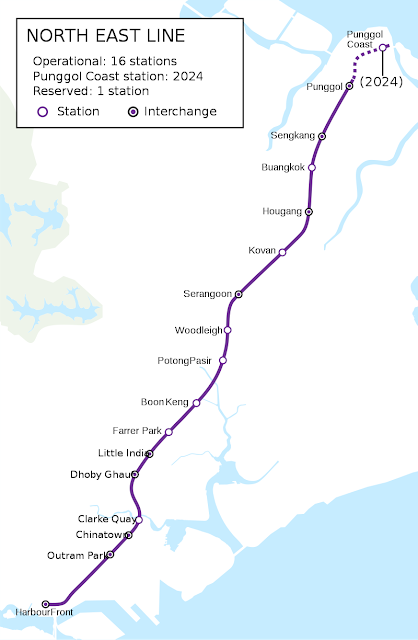 With 16 stations over 20km from Punggol to Harbourfront, this is Singapore’s
first fully automated underground rail line. This is also the shortest MRT
line in Singapore. There are plans to extend the line to Punggol North, which
should be completed by 2024.

While the line does not stop at Sentosa, You can transfer to the Sentosa
Monorail at Harbourfront. 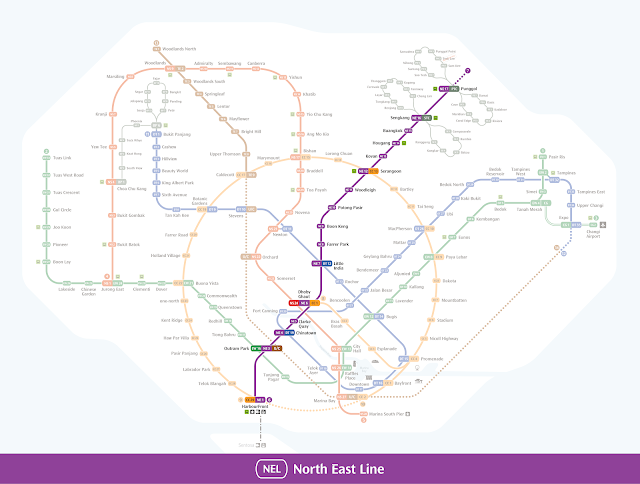 There are a total of 6 interchanges on this line. 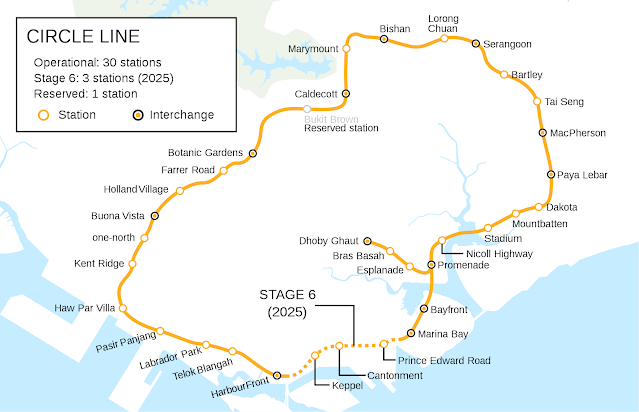 The Circles line is not a complete loop. This line connects to all other lines
with 30 stations in a circular network. The start point is from Marina bay and
Dhoby Ghaut, with the end at Harbourfront. There are plans to close this loop
with a connection from HabourFront to Marina Bay by 2026. 3 additional
stations ( Keppel, Cantonment and Prince Edward) are planned in this final
phase.

Unlike how it is depicted on the MRT map, the circle line is not a complete
circle. 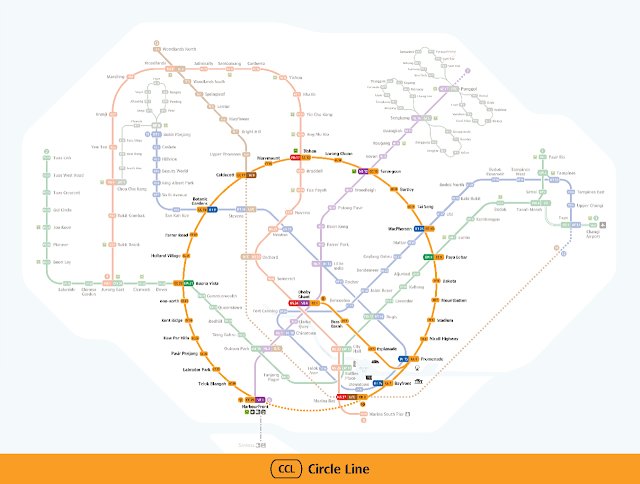 Given that this is essentially a line that connects all other lines, there are
11 interchanges on this line. So in terms of connectivity, residents on this
line have the best connectivity to the whole of Singapore. 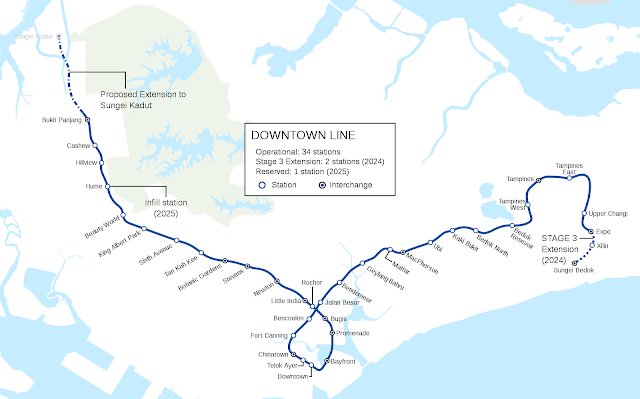 The Downtown line has 36 stations over the length of 42 km. This was a game
changer in public transport as it brought residents from East to West to the
CBD area. It was initially planned as 3 separate lines, but I am now merged
into one. It currently starts from Bukit Panjang to Expo.

Sungei Bedok will begin operations in 2024, while a new infill station, Hume
Station, is planned to open in 2025. An extension to Sungei Kadut is scheduled
to open in 2030. 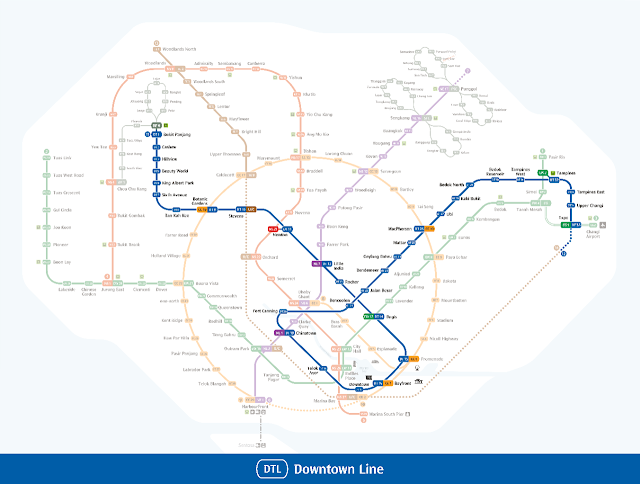 There are a total of 11 interchanges on this line. Like the circle line, it
also directly connects to the other 5 major lines. 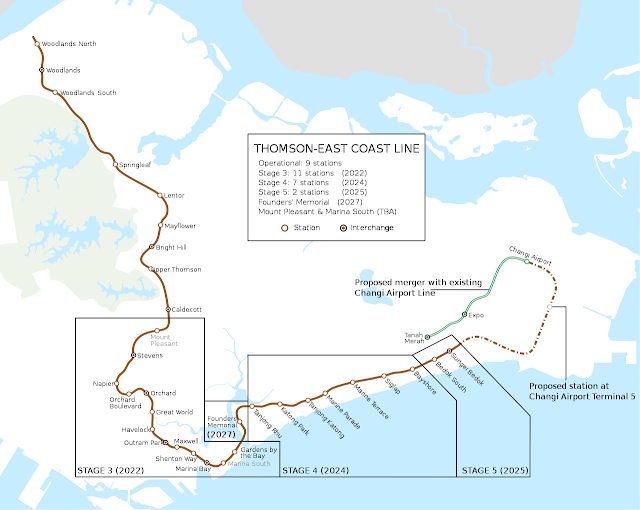 Thomson East Coast Line will have 32 stations over 43 km. This line is dubbed
the Game Changer for residents living along the Marine Parade and East Coast
road, as there was a lack of connectivity for MRT along this stretch. It
stretches from Woodlands North to Changi Airport (2040).

Currently, this line will be opened in 5 stages. Stage 1-3 is expected to open
from Woodlands North to Caldecott by Q3 2022. A proposed station to Changi
Airport will eventually merge this line with the East-West line. This will be
commerce by 2040. 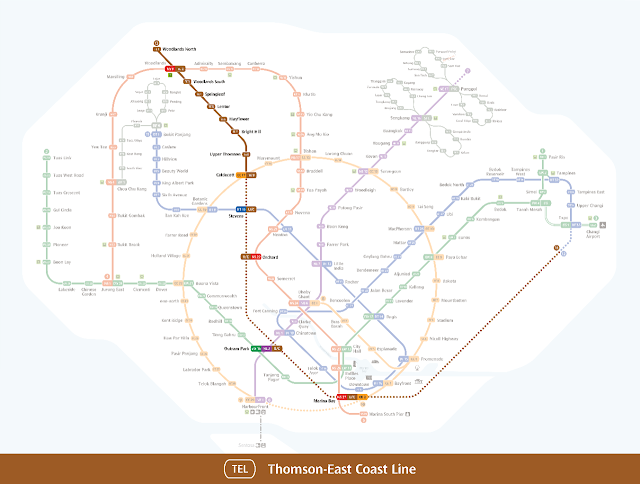 As of today, there are 2 interchanges available. These will increase when the
other stages are open. 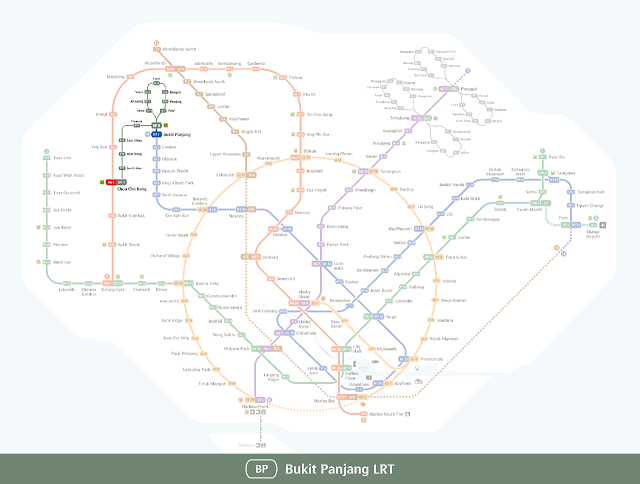 Bukit Panjang is Singapore’s first Light rail and connects estates within
Bukit Panjang and Chia Chu Kang to the North-South and Downtown lines. 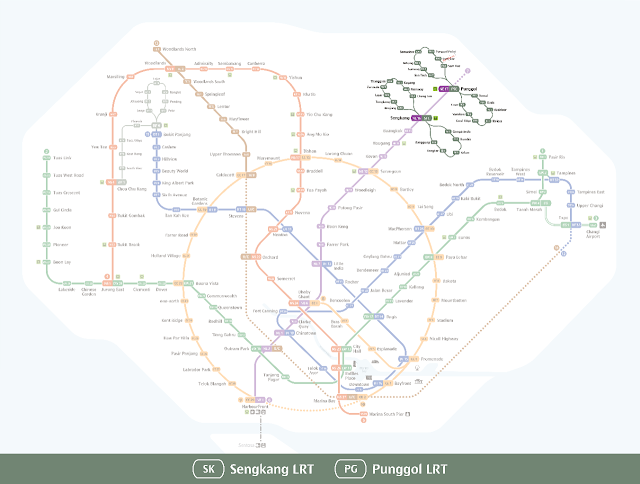 A fully driverless system will connect Sengkang and Punggol to Sengkang and
Punggol MRT, respectively.

If you think that the current lines are already enough connectively, you
would probably be shocked that there will be another 2 main lines to be
added in the future. 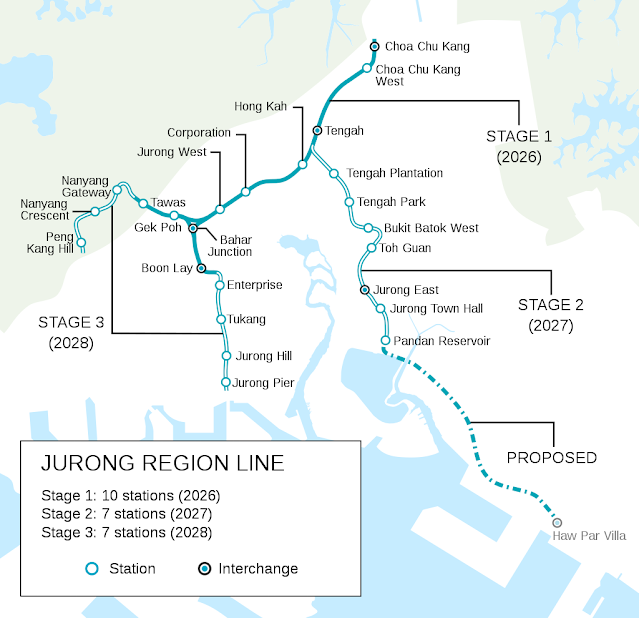 There will be a new line in the West with the Jurong Region line. This will
have a total of 24 stations over 24km, connecting the new town of Tengah to
Jurong East Interchange. There are plans to connect NTU to MRT line for this
stage.

Singapore’s seventh line is expected to be completed by 2029.

Once completed, the Cross Island Line will be the longest fully underground
line, over 50km long. It will connect major hubs such as Jurong Lake
District, Punggol Digital District and Changi Region. Currently, there are
over 30 stations slated for this line, and more may be confirmed later. 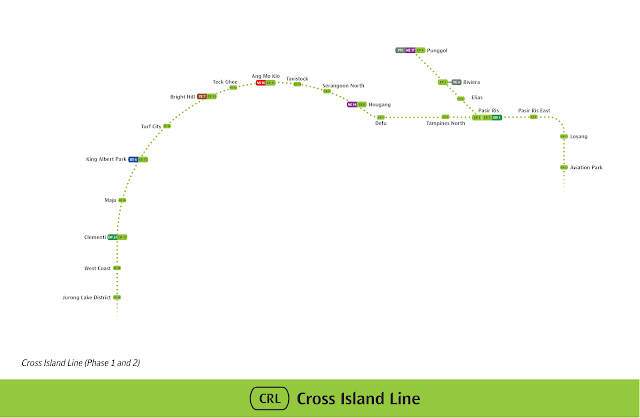 Are we done yet?

While the tracks have been laid till 2030, there are still pockets in
Singapore that could be better served by the MRT network. With Paya Lebar’s
air base relocated, there is a vast 800 ha area to be developed. Currently,
there is no stations planned for this stretch though Cross Island Line would
pass through this area.

In the future, we might even extend beyond our shores with lines connecting
to Malaysia and beyond. That may be after our time, but one for the next
generation.